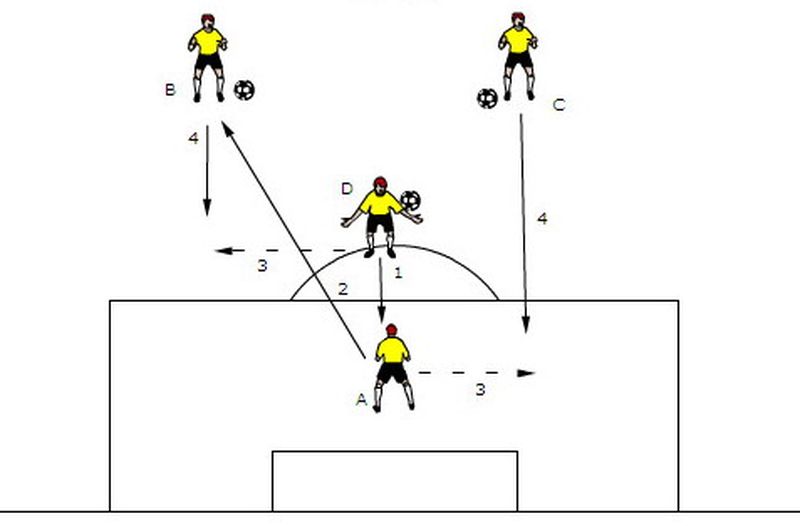 Goalkeepers A and B in the attitude of goalkeeper standing back to back inside the "Clock" - a square with a diagonal of about 6 m, followed by the ball (the ball) conventionally labeled "time 12" ahead "h 6" and on their sides respectively "3 o'clock and 9". Partners C and D initially indicate your desired ball and passes the command line with the term "hours" assigned to it. Goalkeepers are designed to perform a step toward her and grab her from falling. After a nip leave them at the previous spot and take up position at the starting point for the exercise. After 6-8 repetitions partners intentionally confuse trainees now pointing the ball but the goalkeeper with the command specifying other than the designated ball. For example, pointing to the ball set "12 hour" call "the sixth". Goalkeepers is to grab the ball falls specific verbal command. In the course of training goalkeepers change their places.. 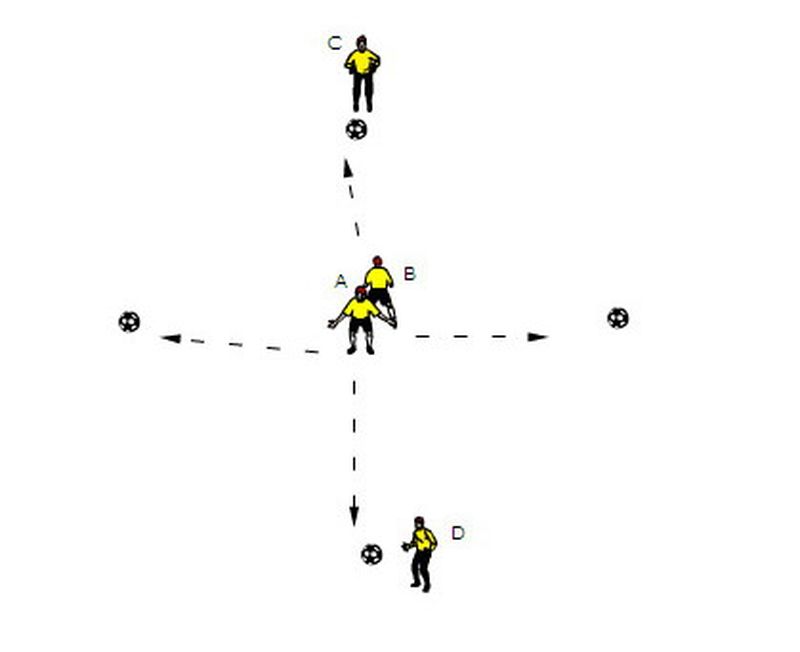 Four goalkeepers set as shown creates two pair. In each of them, one of the goalkeepers standing with his back to the partner throws the ball to the back of the back slope and pass through between their legs (1). After passes vigorously turns (2) and catches the ball hit by the partner of the first ball (3). In the further course of training goalkeepers after back between his legs do not turn away just run out in front, ahead of defending given up partner shot from the opposite direction (both hit the ball in a certain direction). 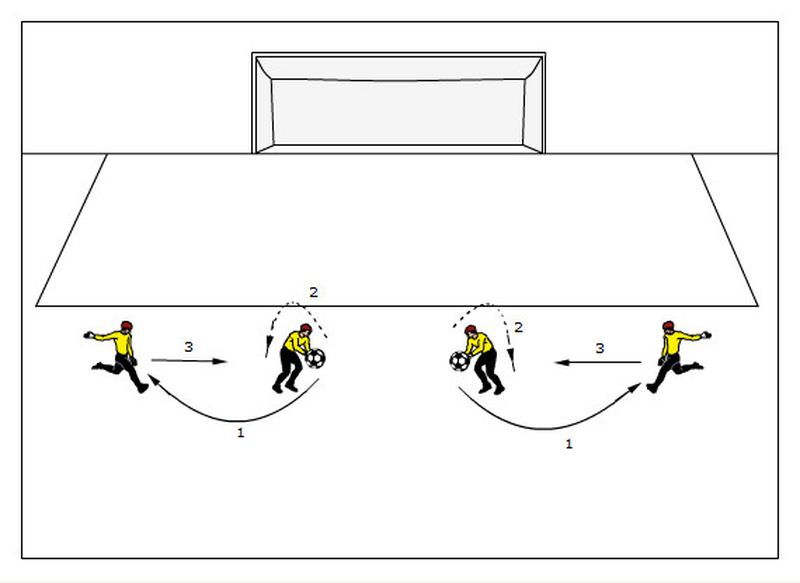 Three goalkeepers and coach (or four goalkeepers) are set as shown. A goalkeeper who lies on his stomach on the ground throws a ball in the direction of a trainer (1) and rolls on his back in any desired direction (2). Task B is performed at the time of the fall of the ball catch in the opposite direction to the movement of a keeper (3). Coach shoots towards the goalkeeper C, which, through the movements of partners until the last minute has a limited field of view (4). 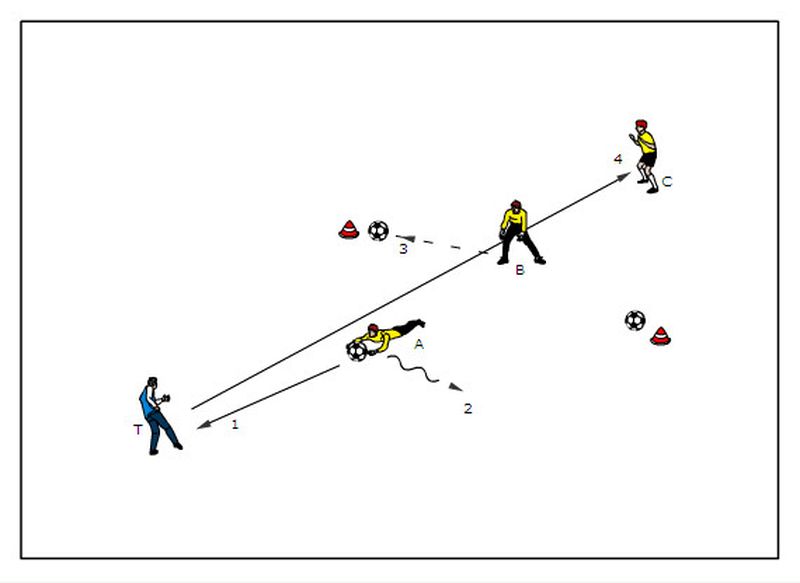 Markers arranged in the shape of the letter "L". Distances between markers no more than 6 m. Practicing starts goalkeeper A tossing the ball the hands up (1). After the runs taking place behind the player D (2). At this time the goalkeeper B reaches the falling ball, grabs it before it hits the ground (2). After the grip and attracting the ball to the chest passes the ball to the goalkeeper C and runs in its place (3). Goalkeeper C the grip the ball and attract her to his chest running with the ball in his hands to the place vacated by the B (3) and tossing the ball up runs for the player taking the place of A (4). At this time, the falling ball reaches the goalkeeper D. In this way, players move performing these steps. 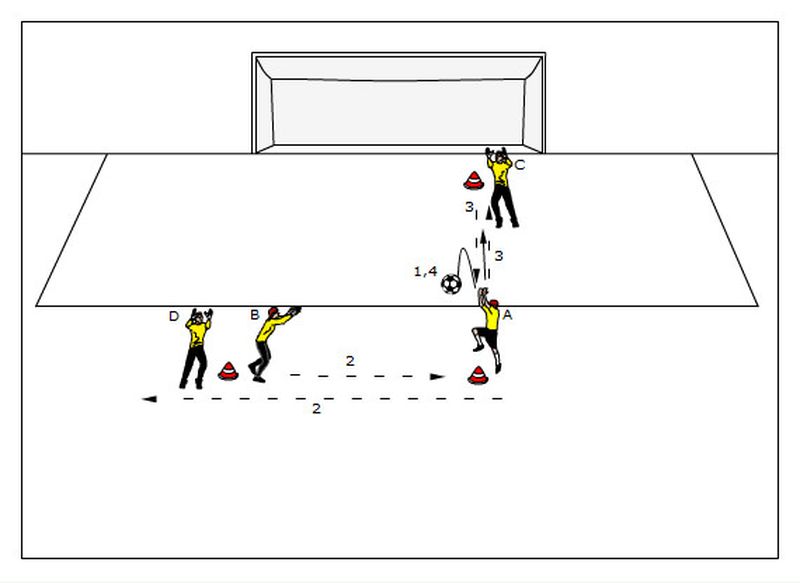 Four goalkeepers set as shown. Two of them take place in the areas bounded by markers. Their partners in the balls in front of the arrows reflect the "cross". After grip ball played back to striking and take up their positions. 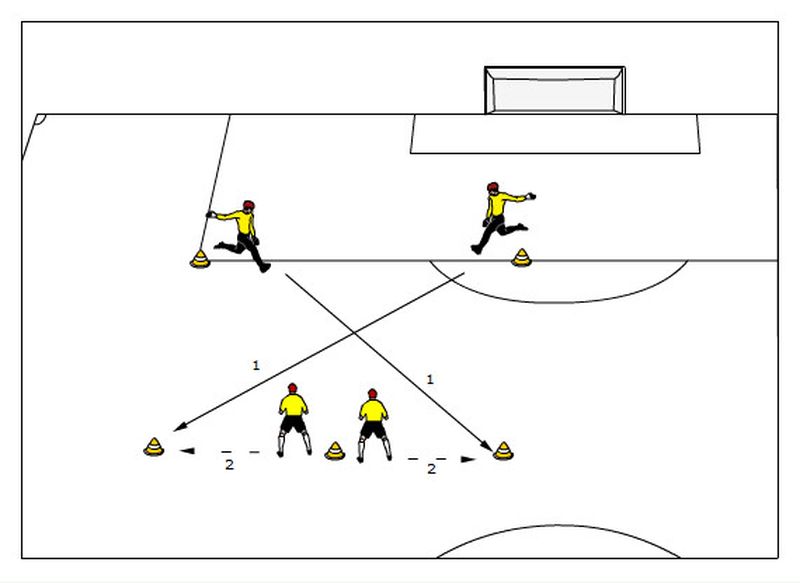 Four goalkeepers (or three and a trainer) arranged as shown. Two of them take place in the areas limited by markers. The partners of balls in front of and behind them. Goalkeeper standing in front of shoots in any area of their choice (1). Goalkeeper located in goal tries to defend the shot (2) and the second signal is that it would at the same time to turn (2) and to protect the back of the ball thrown by the fourth keeper or coach (3). 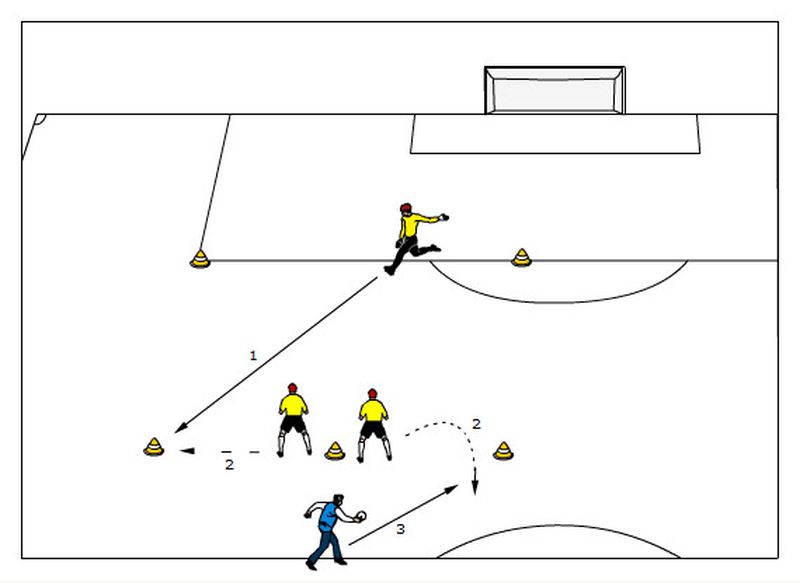 Goalkeeper A and B at the same time serve the ball over a surface located opposite to the partner C and D (1) and these first touch the inner part of the feet - exactly hit the side, so that the effective force exercising the fall of ball grip (2). Goalkeepers leave the grip the ball between the cones and change places (3) where again play hand ball on the ground left by a friend in this way, creating a series of exercises. 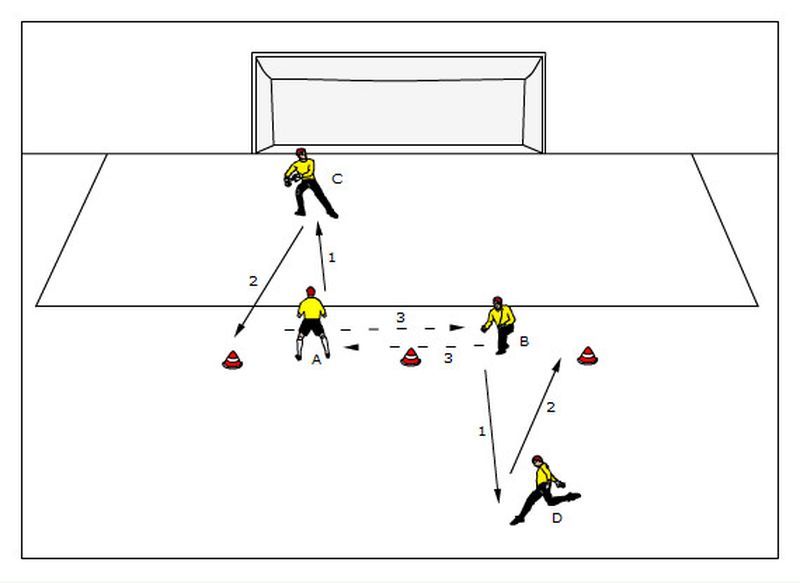 The setting and the square as shown above. Depending on the available coach goalkeepers have ball or practice without them. Goalkeepers A and D according to their own ingenuity to invent any activity - exercise, movement or gesture. The task goalkeepers B and C to perform the same steps in reverse. The fact that B and C are standing facing each other causing additional difficulty in imitation and gives a lot of funny situations. After a few repetitions goalkeepers change roles. 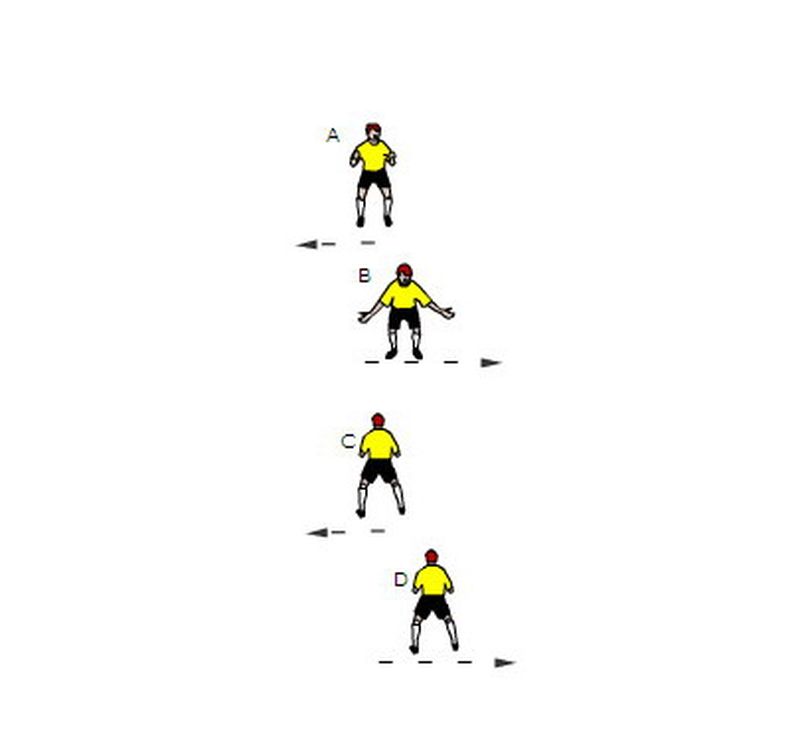 Players lined up as shown. Practice starts T - giving the goalkeeper A (1). His task is to play ball to the player not having a ball with the proviso that it can not be required to provide feedback. In the situation shown in Figure A must therefore be communicated to the B (2). A second ball is given to the C (3). Goalkeeper A must therefore do more to provide for the T (4). 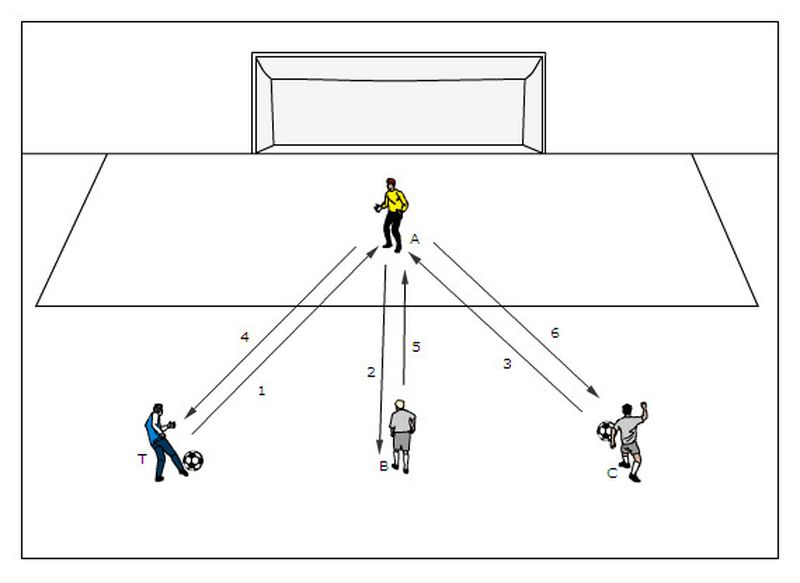 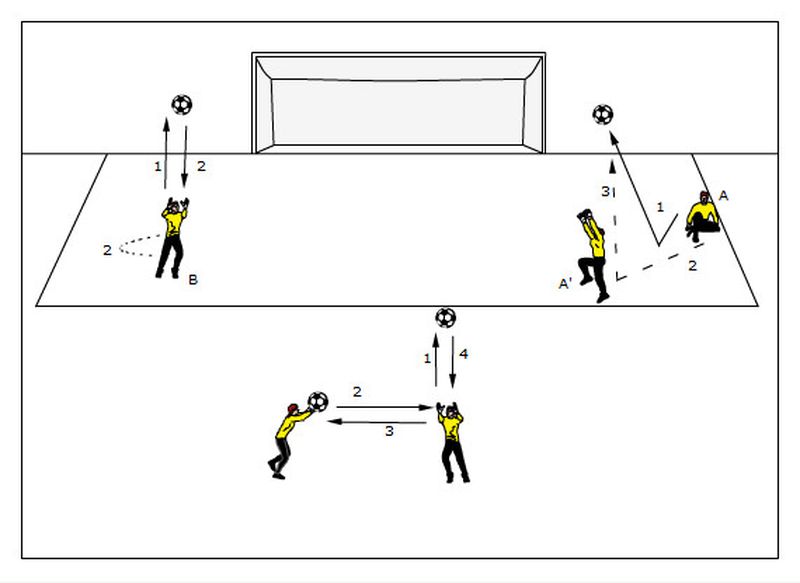 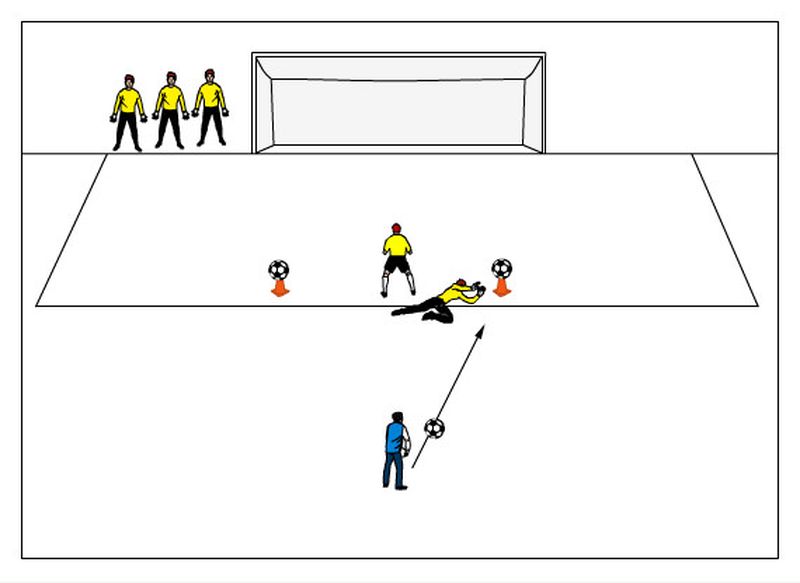 Four goalkeepers set as shown. One pair of lists with each giving hands. One passes the ball on the ground and one in the top. One of the second pair of goalkeepers holds the ball in one hand. Partner throws him his ball. If the ball is directed at his "free" hand of his task is to discard the ball he received from the partner. If received a pass on the "busy" then rejects the hand ball in his hand with one hand and grabs the one that gave him a partner. 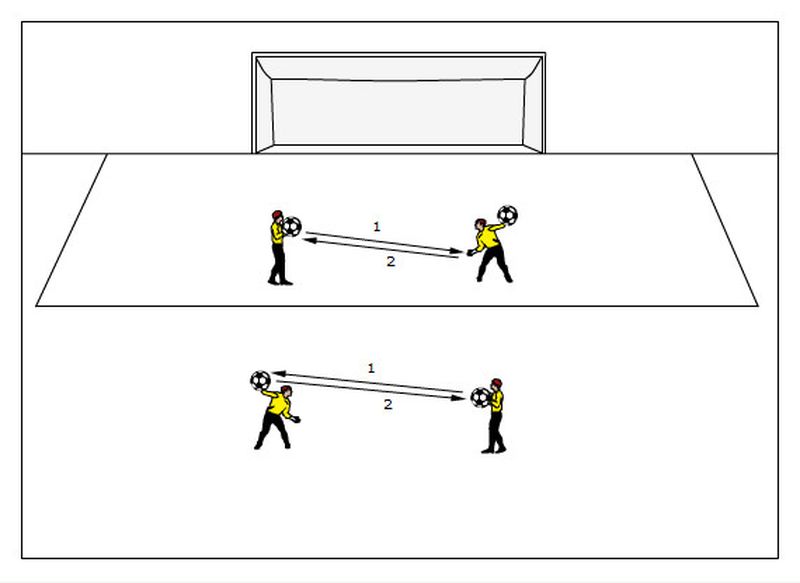